Coupons Close
1-208-908-1014
Service Area
Free Quote
Blog
Home»About Us»Blog»What is street creep and how does it impact people in your area?

What is street creep and how does it impact people in your area?

We get it – Street Creep sounds a little funny. Unfortunately, the damage it causes can be serious. Street creep happens with the concrete road by your house expands and pushes against your driveway. Your driveway, in turn, pushes against itself and your home.

Because of this, many homebuilders install expansion and control joints in the driveway to offset the pressure.

You probably won’t notice this movement as it happens about a fraction of an inch at a time. But over time, it can result in several inches of movement. This could end up pushing your driveway into your home’s foundation, making the problem much worse and way more expensive to fix.

Having a concrete repair contractor come out and diagnose Street Creep is the best first step in addressing the problem. Our company can put in a solution that contracts and expands with the concrete and also seals off the joint from debris.

Street Creep is a problem that slowly, but surely, becomes worse over time. The sooner you take steps to address it, the less damage it will cause and the less expensive it will be. 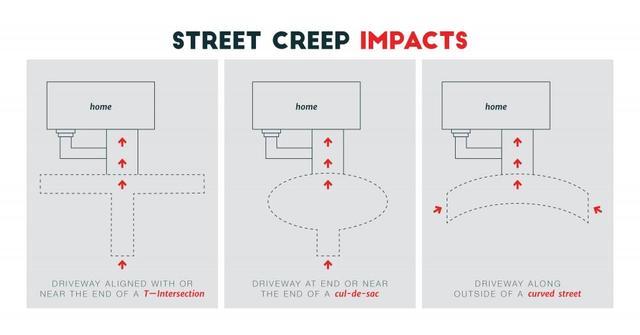 Back to Previous Page
Back to News & Events