We are hiring! We are looking service professionals with a strong desire to succeed and excel.

If this sounds like you, we would love to hear from you! 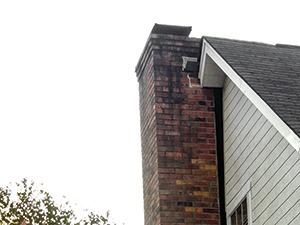 As most houses are built, the chimney's foundation is added to the home's foundation (some are poured at the same time). A full masonry chimney can weigh tens of thousands of pounds.

If your chimney's foundation (or the soils underneath that foundation) are unable to support the weight of the chimney, it will begin to tilt. A helical pier system can repair this damage.

Your chimney or smokestack is tilting and separating from your home.

How to Fix It:

We repair tilting chimneys with the Supportworks Helical Pier System.

These can be mounted directly on to the chimney's footer, and can even be used to attempt to lift the chimney back to its original position.

However, structural issues with your chimney are often connected to other, potentially much more serious foundation problems. The same problems that caused your chimney to lean and show signs of failure can apply equally to your foundation or structure.

We fix tilting, leaning chimneys! Call us for a free chimney foundation repair quote today! We serve Idaho Falls, Boise, Pocatello, and many nearby areas in Idaho.

One of the most shocking and dramatic signs of settlement is a chimney separating away from the rest of the home. A professional foundation contractor will be able to assess the damage and identify the cause and extent of the problem. Because this is often one symptom of a potentially serious foundation issue, we recommend checking the rest of the house for problems as well.

A Word Of Warning: filling in the void between your house and chimney is not the answer! Many homeowners will have the void filled with masonry, foam, caulk, or some other material. This is a temporary fix only -- and it'll have to be removed when the real repair is done. 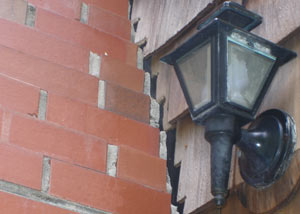 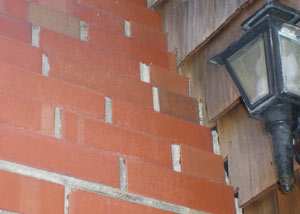 (Top) A chimney is tilting away from the home foundation by about 1".

(Bottom) The chimney repaired with a helical pier system, used in conjunction with a push pier foundation repair on the main house foundation.

Why Do Chimneys Lean?

Chimneys will sometimes fail when they have a missing or inadequate chimney footing. When this occurs, your chimney has not been designed with the proper structural support, and it must fail over time.

However, chimneys experience tilting problems most commonly when the structure has been built on poor supporting soils.

If the soils supporting your chimney are not sufficient to hold its weight, the chimney may begin to sink, causing it to separate from the rest of the home and tilt outward.

If this is the case, it's possible that the soils underneath the rest of your home are also unable to hold the structural weight of your home.

A foundation expert should be consulted to see if other issues with your foundation are present.

To repair a tilting chimney, we at Foundation Supportworks of Idaho recommend stabilizing it with a helical pier system.

These foundation piers include a helical blade that allows the piers to be driven (or "screwed") deep into the ground to stronger supporting soils.

We Do Tilting Chimney Repair In Idaho!

At Foundation Supportworks of Idaho, we specialize in foundation repairs of all kinds -- including those related to tilting, leaning chimneys. Our warrantied solution will quickly and permanently solve your foundation issue.

We provide free, written foundation repair estimates to homeowners throughout our service area. Each estimate is made in person, on site, and comes with no obligation to you.

Get a FREE Quote!
Related Pages